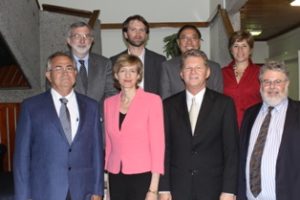 Washington, DC – September 29, 2010 – The Inter-American Institute for Cooperation on Agriculture (IICA) hosted the 12th Annual Meeting of the Board of Directors (BOD) of PROCINORTE on September 27 and 28th at its headquarters in San Isidro de Coronado, Costa Rica. PROCINORTE, a coordination mechanism for agricultural innovation between Canada, Mexico and the US, has received renewed commitment from its members to support agriculture, science and technology in these countries.

PROCINORTE Executive Secretary, Priscila Henríquez, a Senior Technical Specialist who supports the groups work from the IICA Office in the United States located in Washington D.C., underscored the need of such collaboration said, “PROCINORTE is being recognized as a valid and unique mechanism to promote the exchange of agricultural technology and knowledge.” She continued, “It is now moving forward to support policy-making for research that influences important tri-lateral issues, such as trade.”

Prior to the Annual Meeting, special attention was given to the revision of the results and impacts achieved by PROCINORTE’s task forces: Genetic Resources, Library and Information Services, Tropical and Sub-tropical Fruits, Animal Health and Plant Health. Also the PROCINORTE Strategic Plan and Business Plan, which were prepared by the Washington Office, were revised. These focus on the organization’s mission, vision, values, goals to work toward the mission, and strategies to achieve the goals that the three countries have in common as expressed in PROCINORTE’s mission. It aims to provide clearer focus for PROCINORTE, thereby producing more efficiency and effectiveness. 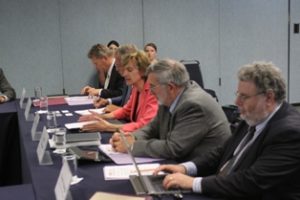 Opening the meeting was Karen Lezny, Deputy Director General of IICA who emphasized the importance of the tri-lateral cooperation. She said, “PROCINORTE is different from other technical collaboration mechanisms in LAC in that it is comprised of highly advanced research institutions. Its challenge is to promote greater knowledge exchange with the participation of different thematic groups of relevance for the three member countries”.

A common theme among all present, including the PROCINORTE Board Members and representatives from IICA and the Agricultural Research Service (ARS) of the United States Department of Agriculture (USDA), was the need to connect PROCINORTE to other PROCIS, regions and countries to share the knowledge generated by the five Task Forces and to learn from the successful experiences of others in themes of common interest. “We at IICA are committed to assist the country members in becoming more integrated into the regional research system and to promote collaboration between other regions through PROCINORTE,” said Dr. Henríquez.

PROCINORTE president Dr. Pedro Brajcich, Director General of the Instituto Nacional de Investigaciones Forestales Agrícolas y Pecuarias (INIFAP), underlined that PROCINORTE has been a useful mechanism to promote capacity building among the three countries. The array of activities carried out by the task forces include research, training and outreaching.

The group evaluated the relevance of each task force theme to the PROCINORTE Strategic Plan and its operations to promote more effective work in the technical areas. One such area included increased participation of regulatory authorities in addressing policy formulation for science related topics including trans-boundary diseases of plants and animals. Other areas discussed included the formation of additional task forces to address specific emerging topics when needed, such as the case of disease outbreaks for which particular expertise is required.

IICA’s Programs on Innovation for Productivity and Competitiveness, Agricultural Health and Food Safety and Biotechnology and Bio-safety were presented as potential areas in which further collaboration will be explored with PROCINORTE. According to the group, overcoming financial limitations and design of a plan to promote coordination and strategic partnerships is essential for the work of PROCINORTE.

The PROCINORTE 2011 Annual Board Meeting will be held in the United States and coordinate by USDA/ARS.

It’s been an exciting time in the northern region for agriculture! Canada, Mexico and United States have been business partners for many years. Working under the umbrella of the North American Free Trade Agreement (NAFTA), they’ve shared several common agricultural problems related to food security, control of pests and diseases and other issues around food imports and exports.

Under the auspice of the Inter-American Institute for Cooperation on Agriculture (IICA), PROCINORTE, the Cooperative Program in Agricultural Research and Technology for the Northern Region, established in 1998, is evolving to be the champion in addressing trilateral priorities in research for priority topics of tri-lateral interest. Since it’s inception, the collaborative mechanism has formed five specialized task forces in genetic resources, agricultural library and information resources, tropical and subtropical fruits, animal health and in the plant health areas. These Task Forces continue to promote successful linkages supporting the interest of the three countries within the framework of regional integration and complements similar efforts in Latin America and Caribbean.

In January of 2008, PROCINORTE was further reinvigorated when the three countries committed to the design of its Strategic Plan to improve its structure and function for the long term, beginning with the organization of national consultations in each of the three countries to update their priorities for agricultural science and technology. The Board of Directors has made substantial contributions to improving the Strategic Plan and is providing guidance for the formulation of a sound Business Plan to ensure the sustainability of PROCINORTE. These two documents will guide the activities of PROCINORTE to fulfill its mission for strengthening government-led tri-lateral cooperation in agricultural science for the benefit of farmers and other stakeholders, and to inform policy makers, in order to contribute to problem-solving on trade issues, and reach out to other American countries, regional and global research networks.

PROCINORTE’s visibility and activity has been amplified through increased attendance and participation in international conferences and workshops, board meetings, submission of research reports and brochures, field activity, and development of a website that features the work of its five Task Forces.

With renovated support from its member organizations and IICA, PROCINORTE will continue to contribute to sharing first-rate agricultural technology and knowledge between Canada, Mexico and the US.